The Wandering Workentins ~ Ron & Ali: God loving, couple with two great sons, two delightful daughters-in-loves and five wonderful grandchildren, Max, Opal, Christopher, Treyson and Alexander. Following the Lord wherever He leads. Travel along with us as we visit family, friends, work wherever He lands us all the while trusting Him every step of the way. We enjoy meeting new people and seeing new things along life's journey.

What We Have Been Doing

Here is a picture blog of different things we have been doing in the last month.  Hope you enjoy traveling along with us.

As you may remember we went to Medina Lake Thousand Trails which is about 52 miles from the Lone Star Corral.  We had a good time just relaxing, swimming, reading and more relaxing.

We decided to go back up the weekend before Father's Day with another couple from LSC.  Hank & Euona went up on Wednesday and we joined them on Friday night.  We did a lot of visiting Friday night and Saturday.  In the afternoon we went to the ice cream social - not a bad deal $1 a bowl and each bowl had 3 or 4 scoops of ice cream.  You had your choice of vanilla, strawberry or chocolate or a mixture of all three.  I forgot the camera so there are no pictures ~ will try to remember the next time.

Saturday evening we bbq'd ribs and Euona made potato salad, coleslaw and corn-on-the-cob.  It was a great dinner and  of course, more visiting. Below is Ron grilling those ribs and Hank and Euona as we visited in their rig.

Below is a collage of pictures (thanks Rick for me how to do this) of the many deer roaming through the park.  Many people pick up deer corn and feed them.  We heard one little boy say he counted 32 deer and Hank stopped counting when he hit 70.  It is not easy to keep track of them as they kept moving trying to get corn.  Some of the larger bucks could get quite mean, shoving the does and fawns out of the way.
A couple of weeks ago we were driving down the road in front of park.  Ron swerved out of the way and pulled over.  Found this little guy in the middle of the road.  We  brought him back to the park to get some pictures and put him in a safe place and not the middle of the road.  That all happened at lunch time.  By the time we were done with work, our turtle friend was long gone.  Too bad, it would have been nice to have him visit for awhile. 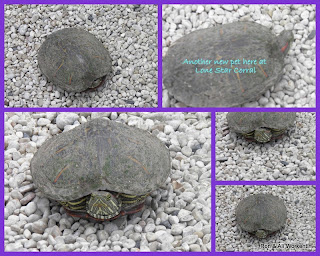 I have been sick the last few days.  This evening feeling a bit of cabin fever we decided to go into D'Hanis for the annual 4th of July Parade.  It went in front of the Country Mart, past the bank and local B&B and then around the block and down the main road for about a half mile and then turned to go down one of the side road and then back to Bill & Rosa's and the Country Mart.  We met Judge Bubba - he was out greeting the citizens of D'Hanis also Deputy Jeff.  Someone was hosting a free hot dog feed but we decided to head back to the motor home.  I was wiped  out.  Below is a movie of the parade.  And a picture of Judge Bubba and Deputy Jeff. 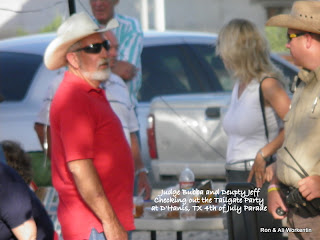 Judge Bubba and his wife Sharon (not the lady in the picture) attend First Baptist Church in Hondo.  After church last Sunday we joined them at the Jade Buffet for some good food and great conversation.  It feels good to connecting with some of people from church.

Hope you have enjoyed traveling along with us on our short jaunts here in the Hondo area.
Posted by Ali Workentin at 8:46 PM

I hope you feel better soon, Ali. Sounds like you've been keeping busy!

Looks like you guys had a fun time, bet you hate to go back to work, Be safe out there. Sam & Donna..

Happy I found your blog (I'm part of the Traveling Friendship Bag tour)! I mentioned your blog and included a link at: http://retrorevivalbiz.blogspot.com/2011/06/traveling-friendship-bag.html.

Sure do hope you are feeling fit again. No fun being down and out. Enjoy yourself but take it easy.

Along the Way with JnK said...

Looks as if you guys found your place in this lifestyle...enjoy!

Good Morning Ali. I was over at Rick Rack and Gingham and Cindy reminded us that you're scheduled for eye surgery Monday. I'll be keeping you in my prayers this weekend darlin'. Be sure and let us know how things go. You're in Gods hands safe and sound.

I hope you and Ron are doing good. Ron's ribs look so yummy!Ya'll have such an interesting life. I can't believe all those deer - Wow!

P.S. I really like your red, white and blue banner, it's so pretty.

We are the On-site Managers here and would love to meet you. Give us a shout out and come and visit for awhile.

States We Have Visited